Boats race for the  ‘ The National 18 EnglishTrophy ‘ 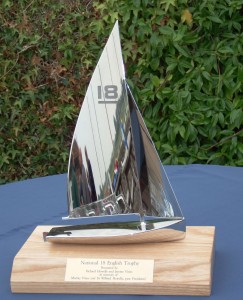 This beautiful trophy was first presented at the 2014 Championships, hosted by Bosham SC

The deed of gift reads:

” This deed of gift is to establish that the National 18 English Trophy is being given to the National 18 Class Association by Jeremy Vines and Richard Howells to be raced for annually in English waters. It is being given in memory of their fathers Murray Vines and Dr. Wilfred Howells who were President and Vice President of the Class, respectively, both for many years.

The Trophy will be sailed using pre-agreed handicaps based on the type of boat (e.g. Ultimate, Pen-Ultimate, Classic & Chichester 18’s etc) and at a location to be decided by the holder. Boats from other countries may compete, but cannot win the Trophy. ”

Please see the sub menu for current and prior events, results and reports.

2014 at Bosham report and results