Bosham SC welcomed visitors from Bough Beech SC, Tamesis, Lymington SC and eventually Blackwater SC, as Team Berney were stuck in a major incident on the M25. Thus, racing was delayed for a short while, after which the breeze kicked in for an amazing afternoon of champagne sailing, bright sunshine, warm water & ideal winds of 11-17.5 knots from the Southwest.

Race Officer, Nick Fox and his team on Bosham’s new committee boat, Glad Emma, set 4 short and sharp races. The first, to warm us all up, was 2 laps windward-leeward followed by three races on sausage and triangle courses. The strong flood tide split the fleet off the line to either side of the harbour, converging again at our windward mark. The good breeze made for some great kite runs and a good workout for those off to Cork at the end of the month for the Class Championships.

Twelve 18s took part: five wooden Classics, three Chichester 18’s, one Penultimate and three of the latest Morrison Ultras. Despite the range in ages of the competing boats, this provided an exciting spectacle and some great competition. It is a testament to the durability and ethos of the class to see one of the Class’s oldest boats, Robert Bailey’s 65 year old DANDY 107, out racing with the newest addition, Jess Berney’s PANTHER 406 launched just days before at White Formula in Brightlingsea.

It was also the first time the recently launched, Phil Morrison designed Ultra’s, Odyssey 400 (Tamesis), Hurricane 401 (Lymington) and Panther 406 (Blackwater SC) had raced together and, unsurprisingly, these three led the way around the courses. 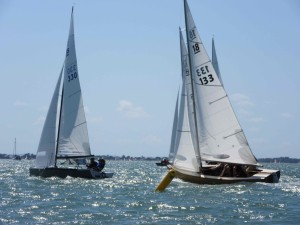 Whilst there there were thrills ‘a plenty in the breezy conditions and at times, not more than a fag paper between boats, there were no major spills, although, one unnamed classic practiced their emergency stop procedures by wrapping their kite around a harbour post…..Result: Post 1 – Kite 0  ….pride…..TBA…..

Bosham sailor, Dick Pratt, swapped his usual 12m2 Sharpie for a Chi 18, Deja Blue. He and his crew of Anne Rehil & Duncan Wilson kept the pressure on some of the more powerful classics with some great starts.

The eventual winners on handicap, Odyssey 400, was helmed by James Fox, Kaan Yargici on the wire and Craig Robinson. Craig had hardly sailed before, but being a quick learner and around 6’2, helped keep Odyssey on a winning track.

After a hot & tiring afternoon on the water,

crews retired to rehydrate at Bosham SC where the magnificent

Congratulations to the winning team of  James, Kaan and Craig in Odyssey.